How to play: left and right arrows to move, space bar to hit/ double hit.

The goal of the unknown Samurai is to reach the end of the passage way and defeat all enemies.

The game jams theme "passage", which made it hard to pin point a direction I wanted to take.  First I thought about passage on a boat, then passage of time, then the different passages in life, but in the end I went with the most basic turn in passage... a passage way. It not any old passage way one filled with treats.

honestly I just want to create something fun and stupid with game maker 2
shout out to heartbeast his youtube channel helped me out a lot.

Neat little game, it took me a few tries to figure out, but I like how you can deflect bullets back at the enemies. Your health bar being displayed on the flag on your back is a nice touch as well. Salsadix covered most of the issues I had, so just fix those and the game could be much better. I'm also not sure if the continue option was working, since I always started at the start when I pressed that, so maybe that was a bug? I also like the story being told in the background, and for a moment thought that the monster that destroyed the village would be a final boss or something. Good work!

I like the artwork, and It was a nice surprise to see the animated wall in level two! It made the game "bigger" and it made me to think "whats the story behind it?" and I think its no small feat to make the player "wonder"

I had fun with your game, but I would work on some things:

-The aesthetic was the right one, but I wouldnt choose pink to stand out. I would rather keep the color palette simple, the grey black and beige are great to work with.

-I won the game! but I had the same "game over" that you get when you die. I feel that you should check that out, the end of the game should (and its a matter of opinion) "wrap up" the experience and I belive that you can exploit it better.

-Be careful with the hit boxes, it was hard to avoid the bullets but it also provide the player a chance to exploit the enemies and hit them from above or below.

-I had nothing to stop me to beat the level. It has enemies and obstacles but I could avoid them and win the level without a fight. I belive its important to give objectives to the player and "kill all the enemies to win the level" its a simple way to give something to accomplish in order to keep the player engaged.

I like the sprites and I feel you had a story to tell here, and it would be awesome If you keep working on that. Thanks for making it! it was fun to play! :D

Hey thanks for playing the game and the feedback.

It was a game jam so I ran out of time in the last level (fire particle weren't working and I spend way too much time on them).

- The "end game" complete screen was rushed... I was working on a boss for that last level (golem thing) but that was cut. There was several story panels  that I didn't have time to implement.

Fun game needs more levels. Movement was quirky but fine when you got used to it. Hit boxes a bit odd and annoying but it was still fun. Good simple art style.

I saw this game being played on the stream and it has a cool aesthetic, the controls feel a bit weird but it's a good side scroller. Remember to keep in mind some knockback mechanic, invunerability frames, etc. Meow! 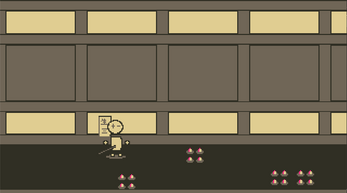 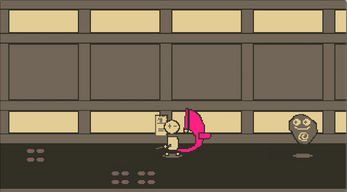 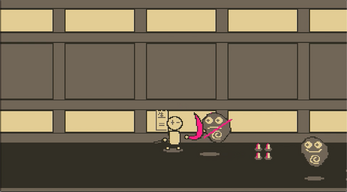